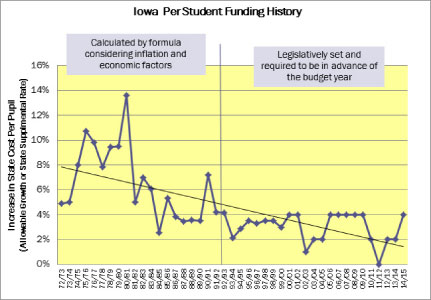 Maquoketa Valley Schools, as well as all other Iowa schools, is again facing another year in which funding proposals at the state level make it nearly impossible to deliver the high quality education that we all expect for our children.  Two facts listed below support the negative impact on Iowa education in recent years:

Iowa’s commitment to increase education funding per pupil has plummeted, as evidenced by the history below, especially since 1993 when the legislature started setting the rate each year rather than an automatic increase based on economic and inflationary factors.

In recent years, schools experienced record low increases in per pupil revenue that have not kept pace with cost increases of running Iowa schools. Those schools that have experienced declining enrollment, such as MV, and the lack of commitment and funding to our schools from our state has lead to teacher, associate and administrative reductions, increased class sizes and reduced bus routes, which has increased student riding time, and fewer course offerings at the secondary level.  (This entire article is available for download as a PDF here)

But this doesn’t have to be.  We can appropriately fund education because Iowa’s economy is strong.  The states reserves are full.  The CRF is full at $522.3 million, EEF is full at $174.1 million, the surplus for FY 2015 prior to vetoes was $612.6 million and the Governor vetoed of SF363 added another $140 million.  To further support the notion that our state is in a very strong financial standing, the Revenue Estimating Conference (REC), estimate of general fund receipts, (which the legislature builds their budget based on this conferences future revenue estimates) that there will be an increase of 4.8% for FY 2015 and an increase of 5.1% for FY 2016.

So as a state, this is a strong indication that we are fiscally sound and we can and should invest in our children, which is obviously an investment in our future.

Because the Governor has chosen to not appropriately fund education the Education Coalition calls on our Governor and Legislature to prioritize the education of Iowa children and set a 6% growth rate per student for the 2015-16 school year.  Setting the 2015-16 per pupil rate needs to be done very quickly. The 2016-17 rate should be set within 30 days of the release of the Governor’s budget, returning to the practice required in Iowa law (Iowa Code 257.8). Setting the rate in advance demonstrates the priority of education, as explained by this Cedar Rapids Gazette Opinion, Feb. 6, 2014:

Unfortunately, recent departures from the requirements of Iowa Code 257.8 have become the norm, which has had a negative impact on our schools.  Note the following instances in which the cost per pupil hasn’t been set timely as required by Iowa law:

Maquoketa Valley, as well as all schools across Iowa, need sufficient notice to anticipate revenue, make timely staffing and curriculum decisions and thoughtfully plan to invest the funds wisely for student learning. The future of Iowa’s students and our state’s continued success depend on a solid investment in the priority of public education.

Although funding has not been a priority with our Governor and legislative body, all of our educators at Maquoketa Valley continue to work harder than ever with less. We have been able to produce significant results, but without a reasonable funding stream we cannot continue to expect the same results.  To name a few of our accomplishments at Maquoketa Valley:

The Governor’s goal for education is to make Iowa schools world class.  All of us strongly agree and want this as a goal.  But with the Governor’s proposal of 1.25% for next school year and a 2.45% increase for FY 2016 and if it is passed by our legislators we cannot expect schools to be world class, let alone be tops in this country.  Because of our values and work ethic Iowa’s educational system is one of the best in the nation. But without adequate funding, this can no longer continue.  The frustrating piece of all of this is the data clearly indicates that our economy is strong, state reserves are full, and future revenue estimates continue to increase.  We can afford to invest in our kids.  Now is the time to make education a top priority so we can continue the work to become world-class.  If you believe that that our schools are underfunded and our children deserve better, it is imperative that you contact our local representatives, senators, and the Governor’s office immediately.  Without your voice being heard, education funding will not be a priority.  The Governor can be contacted at https://governor.iowa.gov/contact/ or a call can be made to 515-281-52211.